First Ever Citation Guide for the Courts of Saskatchewan, part 3 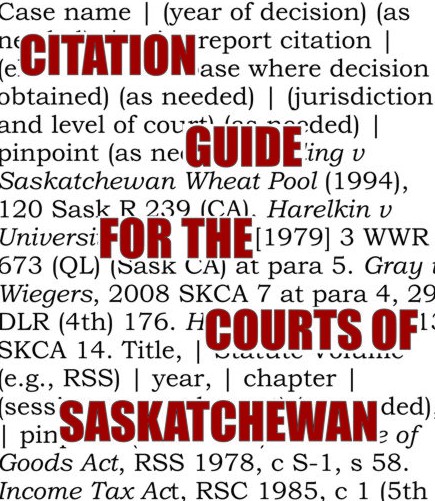 The Citation Guide for the Courts of Saskatchewan adopts a hybrid approach when it comes to using periods within a citation. What this means in practical terms, is that all periods are removed from citations except those contained in proper nouns, including corporate names or abbreviations in individuals’ names.

You may wonder why there is a need to eliminate periods. What has the period done to us anyway? Or, you may be on the other side of the fence and wonder why periods need to remain in citations at all. Let’s explore.

The removal of periods from acronyms makes sense. We do not write C.B.C., we write CBC. We write NATO, NFL, CFL, NBA, and NHL. We can therefore do the same with RSC, RSS, SS, SCR, DLR, WWR, CR, CCC, and so on. We know that “RSC” stands for the “Revised Statutes of Canada”. And we know that “CR” stands for the Criminal Reports.

However, the Guide prescribes that periods must be retained in proper names where their removal could cause confusion:

Note that within a citation, periods should be removed from “para” when dealing with a paragraph number and from “s” when dealing with a section number. But these rules only apply to proper citations. Within the body of a document, these abbreviations keep their punctuation e.g., “The Court made the following statement at para. 25.” In this case, because “para” is not within the citation proper, it must retain the period. Or, in this sentence “the Court called for a combined approach to s. 241(2) of the Canada Business Corporations Act”, the period is retained after the “s”.

One last place where periods will remain is in a list of authorities or a bibliography. In that case, you still continue to end each citation with a period. For example:

So, what does this mean for you?

It means that you will have relatively few periods in your citations. But, as described above, you need to keep them when referring to proper nouns within citations.

Ann Marie Melvie is the Librarian at the Court of Appeal for Saskatchewan, having served in this position since 2001. She received her Bachelor of Education from the University of Saskatchewan and her diploma as a Library Technician from SIAST.

Joanne V. Colledge-Miller is currently an associate at MacPherson Leslie & Tyerman LLP, practicing in the areas of commercial litigation and class actions.