How to search Saskatchewan’s Hansard

In my last post, I explained how to trace a statute’s history. However, figuring out how and when a statute has been amended is only part of a statute’s story. Why a statute has been amended (or created, for that matter) is also of interest to an intrepid legal researcher. The “why” of statute creation and amendment is most often found in Hansard, more formally known in Saskatchewan as the Debates and Proceedings of the Legislative Assembly of Saskatchewan.

Hansard is a substantially verbatim report of the debates that take place in the Legislative Assembly and its committees. The Assembly’s website indicates that “The policy of the Saskatchewan Hansard editors is to provide a verbatim record with a minimum of editing and without any alteration of the meaning of a Member’s speech.” Hansard in other jurisdictions is commonly edited to provide “substantially the verbatim report with repetitions and redundancies omitted and with obvious mistakes (including grammatical mistakes) corrected, but which, on the other hand, leaves out nothing that adds to the meaning of the speech or illustrates the argument.” [1] I, for one, am thankful to Hansard editors for making the debates a little less frustrating to read.

In Saskatchewan, Hansard is produced after each daily sitting of the House and is available the following morning. The daily editions of Hansard can be accessed on the Assembly’s website through the Legislative Calendar. Any date for which legislative information exists is underlined. A click on the date of interest will list the available legislative information for that date, including Hansard, Minutes, Orders of the Day, Meeting Notices, and archived video. This sort of search may be useful if you are actively following a Bill’s progress through the House.

For historical research in Hansard, however, the indexes are much more useful. Both a subject index, which lists which MLAs have spoken to a specific subject, and a speaker index, which lists which topics a specific MLA has talked about, are provided online from present back to 1998. Indexes prior to 1998 are available at the Legislative Library. I refer exclusively to the subject index when researching a statute’s history. 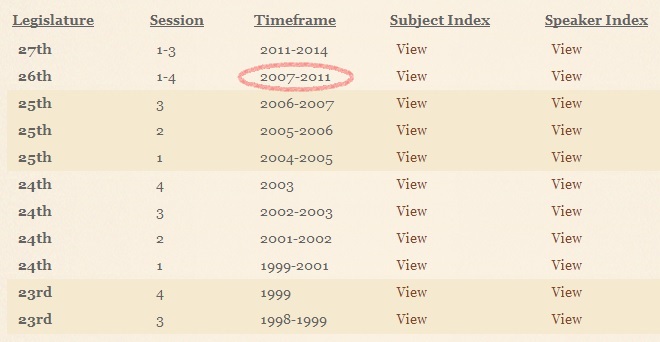 Once in the index, I could scroll through the alphabetical list or use the alphabet links at the top of the list to jump to the letter I am interested in. Instead, I use the Ctrl-F find function and type in “Agreements of Sale” which takes me directly to the link for The Agreements of Sale Cancellation Amendment Act, 2008 (No. 44). After clicking the link, I am taken to a list of each time the Act was considered during Debates and in committee. 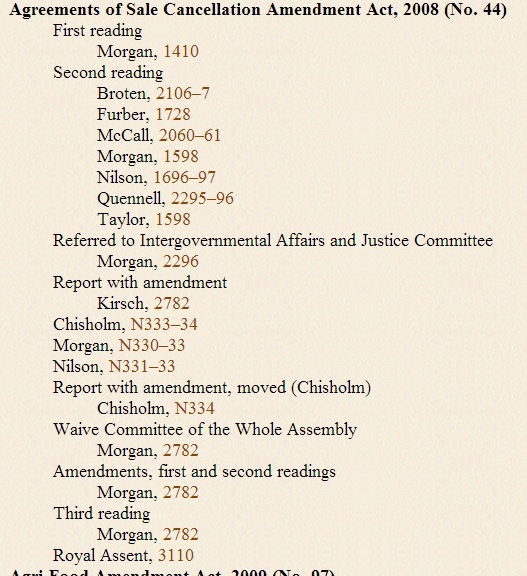 Each mention in the list is followed by a page number linked to Hansard. A click on the page number takes me to the discussion of the Act in the Hansard document. For a description of the many stages listed (First reading, Second reading, etc.) check out the Assembly’s “How Laws are Made” page. Although I review each mention listed in the index, the most useful discussions of an Act are usually made at the second and third reading, and in committee.

Hansard can be a valuable information resource, but it does have limitations. Transcriptions of debates were not produced until 1946. Incomplete transcriptions were produced between 1946 and the late 1970s, when gavel-to-gavel coverage of the Assembly’s proceedings began. Between 1905 and 1950 the Legislative Library maintained a ‘Scrapbook Hansard,’ which is a chronological collection of newspaper articles about the proceedings of the Legislature, however, unless an Act or an amendment was particularly noteworthy or controversial it is not likely to be included. For Hansard research beyond the indexes available online or through the Legislative Library, you may wish to consult with your librarian or contact the staff at the Legislative Library.