A few months ago, Ken explained how to track a statute’s amendment history back to the 1978 Revised Statutes of Saskatchewan (RSS 1978) using the Tables of Public Statutes. Today, I am going to share with you how I trace a statute’s history beyond 1978 to its Saskatchewan origins.

First, a confession: I rarely consult the Tables of Public Statutes. Instead, I find the consolidation of the Act I am interested in on the Queen’s Printer website, and research the trail of notations following the amended sections. Admittedly, this approach is easier with a short Act. For a long Act, I would likely use the Tables. 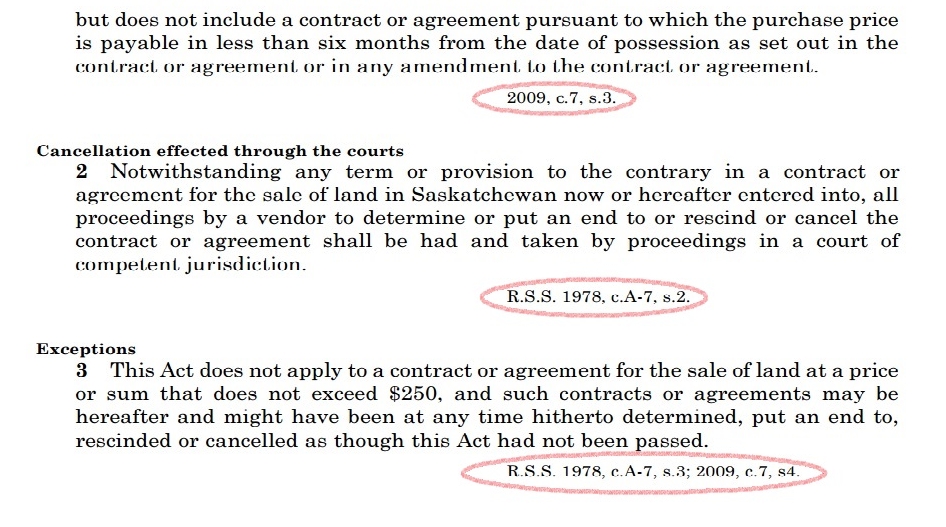 On the Separate Chapters page, I select “2009,” and on the 2009 page, I select “Amending, Repealing and Temporary Public Acts.” I am provided a list of all such Acts for 2009, from which I select “Chapter 7 – The Agreements of Sale Cancellation Amendment Act 2009.” The amending Act indicates exactly how The Agreements of Sale Cancellation Act was amended in 2009, and also makes similar amendments to two other Acts. I make note of the amendments.

So, now I know the Act’s history back to 1978. However, unless the Act was enacted as part of the RSS 1978, there is more to the story. This is when I go to the books. I find the RSS 1978 volume containing Chapter A-7, and I flip to the Act. Notations will appear after each section of the Act, as in the first image above. In this case, each notation reads “R.S.S. 1965, c. 121” and then the section number. So I find the appropriate volume of RSS 1965, and flip to the Act. It directs me to RSS 1953, c 114, which directs me to RSS 1930, c 86, which directs me to RSS 1920, c 72. Throughout my research back in time, I note the changes to the Act in each of its re-enactments in an RSS. Normally, these are stylistic changes to language, but they may be important.

The RSS 1920 directs me to SS 1917, c 31 for section 2, and to SS 1918-19, c 78, for section 3.  The SS 1917 is the first enactment of The Agreements of Sale Cancellation Act, consisting of only one section (equivalent to the current section 2). The SS 1918-19 is An Act to amend An Act to provide for the Cancellation of Agreements for Sale and adds the equivalent to the current section 3, but also notes “the proclamations of the Lieutenant Governor in Council of November 5, 1914 and March 13, 1916.” (Finding the proclamations is beyond the scope of this post – I recommend asking a librarian.) Having located the proclamations, I discover that the Act originated as a proclamation “for the protection of the property and interests of persons who have joined as volunteers the forces raised by the government of Canada” for the First World War. Now, that is interesting!

I hope that you find my example of tracing The Agreements of Sale Cancellation Act back to its creation almost 100 years ago helpful. Historical research of a statute is very satisfying research that provides an opportunity to use, and an appreciation of access to, “old, dusty books that nobody reads anymore.” I hope that you get the chance to trace our laws back in time, and that you enjoy it as much as I do.